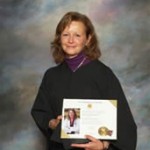 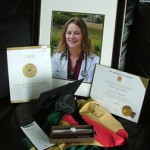 On May 14, 2009 Lindsay was awarded a posthumous Doctor of Medicine degree from the University of Calgary. The Dean of Medicine Dr. Thomas Feasby presented Lindsay’s degree to Dianne on the stage of the Jack Simpson Gymnasium. In his letter to Lindsay’s family Dr Feasby stated this rare honour was bestowed upon Lindsay to communicate the regard with which Lindsay was held during her time at the University of Calgary. He said, “Lindsay is remembered for many merits including her positive attitude, her academic performance and her zeal for hockey.” The Kimmett family is honored to accept Lindsay’s degree and graciously thanks the university faculty, support staff and especially her fellow classmates. The following evening Kelly and Dianne attended the Class of 2009 Graduation Banquet held at the Palomino Room in the Roundup Centre. The Kimmetts wish to thank Masters of Ceremonies Dr. Katie Giles and Dr. Breanne Everett for our invitation to the special evening and their kind words about Lindsay as they introduced us to award the first Dr. Lindsay Leigh Kimmett Prize in Emergency Medicine. We were proud to present the award of $2525.00 to Dr. Meira Louis a very special friend of Lindsay. Dr. Louis has matched to emergency in Calgary where she will be commencing her career in emergency medicine. Valedictorian Dr. Daryl Wile also paid tribute to Lindsay in his address, “I think the last lesson from medical school is the most important one and the one that will last the longest and that is to look after one another. I won’t attempt to summarize how much this type of support meant for each of you when we lost our friend Lindsay Kimmett. I know that this affected all of us deeply and each of us differently. We are proud she was our classmate and she is dearly missed tonight.” In his keynote address Dr. Bruce Wright Associate Dean UME, who also spoke at Lindsay’s funeral stated the Class of 2009 had overcome many obstacles particularly a horrible, senseless death and that he encouraged the new graduates to find a hero. He felt that he had found many heroes in his career and that some of the 2009 graduating class were already in that category. The Kimmett family is confident that the Class of 2009 will not only find their heroes they will in fact become someone else’s hero. Dr. James Leung concluded the program with an incredible powerpoint production chronicling the classes 3 year adventure in medical school. He ended the production with a poignant salute to Lindsay saying, “one of us is missing tonight and that the class will tell her story as Dr Wright said they should.” He ended the tribute with a simple “thank you for being an awesome classmate.” The Kimmett family wishes to thank all of Lindsay’s classmates for her inclusion in their convocation celebration and the faculty and university for the conference of her degree. Our family hopes that you will all remember Lindsay, perhaps when you see a hockey player giving everything they have, maybe a quiet toast to her when sipping your Viognier or a quick consult with Linds when you are writing a prescription. We are touched and honored that Lindsay was a part of your class even in death and we wish all the best life has to bring in the years ahead. Congratulations! 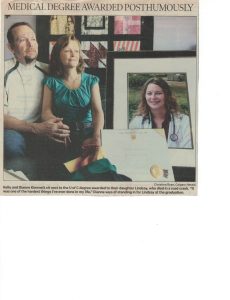