When Lindsay first switched from Ringette to hockey in 2002 she was discussing with her brother Reid which number she should have on her new jersey. He asked her what her favorite numbers were and she said 20 and 5 so Reid said her number should be 25. Through her years with the Rangers, Prowlers, Sirens, Jets, and Macaques it has been #25 ever since. 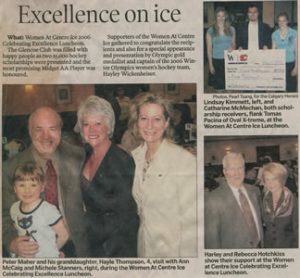